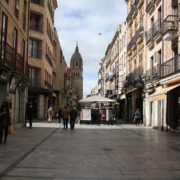 Hello! I’m Cristina, and today I’m going to tell you about a new itinerary. Do you feel like putting on your sneakers and picking up your camera? Today we will discover many more places together!
I go to the Plaza Mayor which will be the meeting place for the “Vía de la Plata” tourist walk. At the beginning of the route the guide tells us some historical details about it. 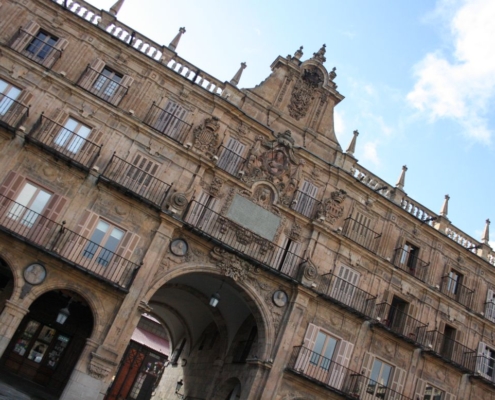 We enter Calle de la Rúa, a street that was the main axis of Salamanca’s commerce and the main area of communication, which extends from Calle Jesús to Plaza Anaya. Here, a wide variety of products were sold, such as fabrics, jewellery, spices…

Currently It is very busy and there are small gastronomic shops with traditional and local products, such as hornazo, ham, farinato, Ledesma donuts… There are also restaurants with terraces, and some other shops with tourist or commercial products. I often stop by because I happen to be at the Convention and Exhibition Center of Salamanca, where I am spending a few months doing an internship as a travel agency student. 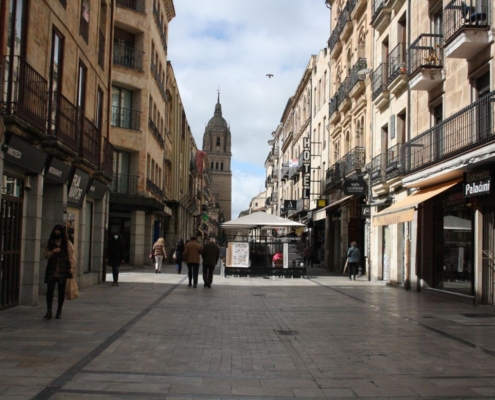 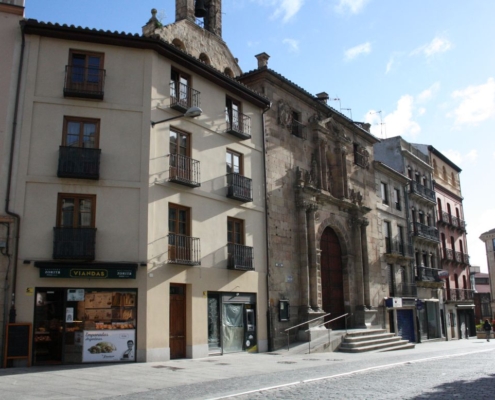 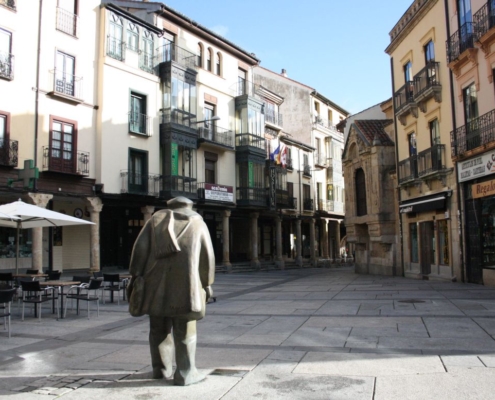 We continue along the path and stop in front of the House of Shells, which, for my taste, is one of the most original late Gothic, Mudejar and Renaissance buildings It has more than 300 shells It is said that it has that aesthetic because the Maldonado family belonged to the Order of Santiago or as a token of love from Don Rodrigo to his wife Juana, whose family had the shell as a symbol of nobility. 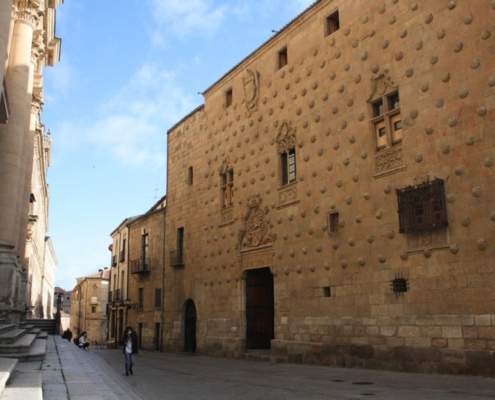 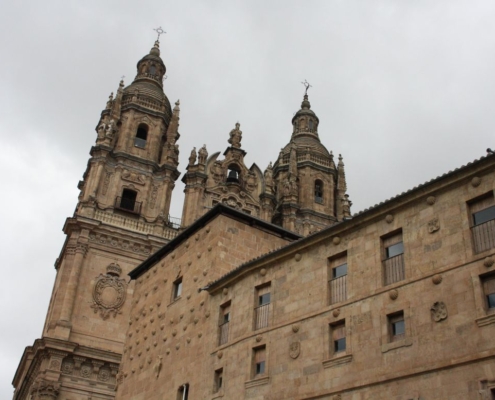 Casa de las Conchas with the Clerecía Towers in the background

Next we are going to observe the most impressive monument of Salamanca for its grandeur, the cathedralIts decoration and light, just like the Plaza Mayor, is incredible to admire. Pigeons and storks flutter at the top of the towers, privileged to enjoy the views of the beautiful city. 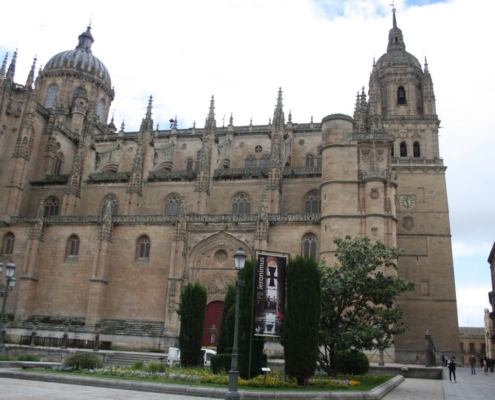 After visiting these monuments in the historic center, we head to the Roman bridge, over the Tormes river. It is one of the best preserved monuments of the Vía de la Plata. 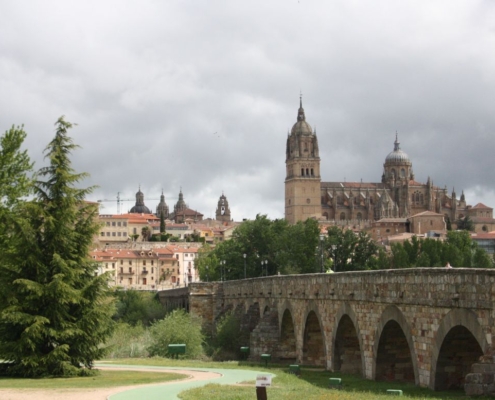 At its beginning we see the statue of the Verraco Ibérico left by the Vettones, pre-Roman people dedicated to cattle breeding that left more bulls scattered throughout the province. 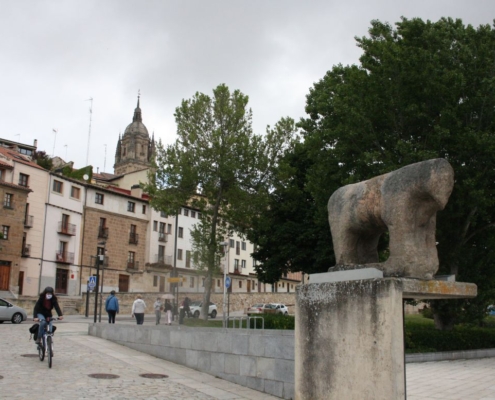 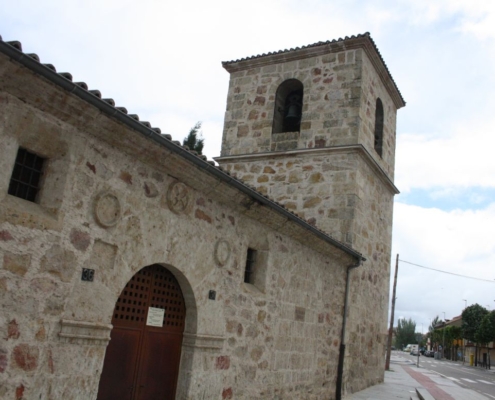 When we cross the bridge we arrive at the Church of Santísima Trinidad del Arrabal, only seen from the outside and from where the procession departs during Holy Week, which, according to the locals is an incredible cultural event. 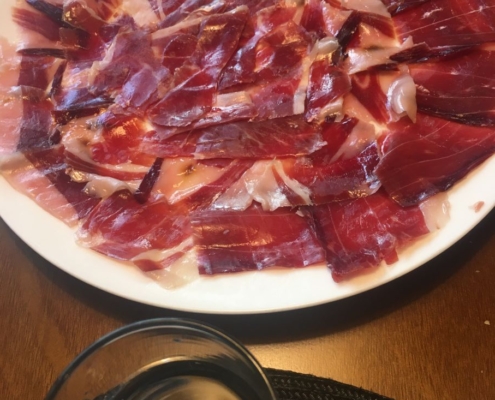 This visit has made us walk quite a bit… I recommend you to try the Guijuelo ham, which they also have as a sandwich. It is from the local gastronomy of Salamanca (a good excuse to get your strength back, and you can easily find it in many of the shops in the center of the city). 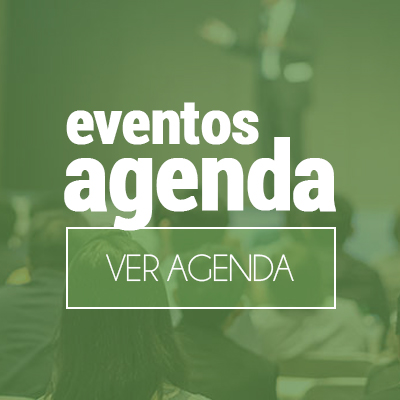